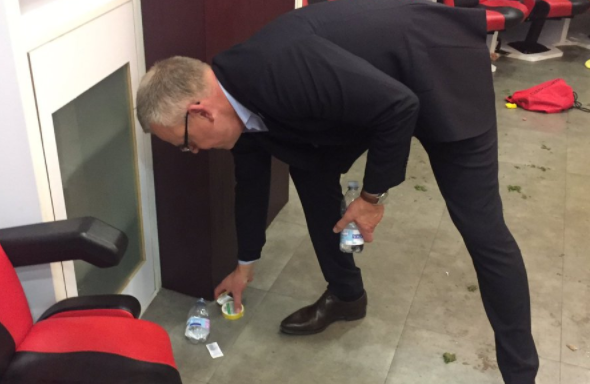 After Sweden wins the match against Italy (I must admit that I was surprised) Daniel Ekvall posts a picture of the Swedish football captain, Janne Andersson, cleaning the changing room after his team.

The image has received a lot of positive response and during his interview the following evening he noted that “not to leave any trash after oneself”. Many people were surprised by this action since many thought he would be bathing in champagne, but that was not the case.

Mr. Andersson explains that it has to do with respect. There should be order and we humans have to be kind to each other. He did not want anyone else to pick up trash after his team. Mr. Andersson does it, and he has no problem doing it.

I agree with Mr. Andersson’s virtues and I do myself try to pick up trash after my friends and families. Many have commentated that Janne Andersson shows these virtues, that it is important for a team to have the objective to create the team together.

Nevertheless, I think this is a great example to follow; that you are never too important to not be able to pick up trash. It shows respect to other people and I encourage you to do the same.