The Ted Talk by Simon Sinek from 2010 may be old. But the message is still relevant for this modern age. If you have not watched it yet, I highly recommend you do so. When you have finished please continue reading this brief reflection on the Golden Circle and how it affects leadership.

Simon Sinek starts off with a question. Why is, for say, Apple much more successful than their competition? They have the same resources, same 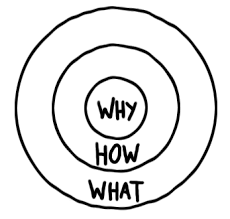 technology, same staff. How come? Simon explains that it is a simple reason: “People don’t buy what you do, they buy why you do it.” Simon continues by drawing the model which he names the Golden Circle. See image. It is labeled from inside out, why, how and what. He explains what Apple does differently from their competition is that they start with ‘why’ they do it, instead of ‘what.’ For example:

We sell environmentally friendly cars. They have great gas mileage and are produced with sustainable materials.

This statement starts with ‘what.’ Not very astonishing. Consider the following:

Global climate changes a current threat to earth as we know it. We believe that something has to be done about this matter. Therefore our cars have great gas mileage and are produced with sustainable materials. We just happen to create great environmentally friendly cars.

Do you feel the difference between these two statements? One of them starts with ‘what’ the other one with ‘why,’ Remember: “People don’t buy what you do, they buy why you do it.” Mr. Sinek explains that the Golden Circle is biologically embedded in our brains. We tend to act when reacting to stronger emotions and feelings rather than to plain facts. The ‘why’ is the driving force for every group and individual. The Wright brothers, who invented the first motorized aircraft in the twentieth century, had huge competition. Their competition had better chances of succeeding with creating the first airplane. They had more resources, finances and more knowledgeable people. But the Wright brothers team all had a common ‘why’, a purpose, while the competition was only driven by money. And so, the strong purpose which created a common goal, in the end, produced greater results.

This model can be translated to any organization or company. An organization is built of smaller groups, some formal and others informal, which include the individuals with different personalities. One way to describe a group process is through the FIRO model. (Fundamental Interpersonal Relations Orientation.) The model includes 5 stages where a group of strangers transforms into a team. In the end, this team will have a common goal i.e a purpose or a ‘why.’ That is how a team achieves more than an individual would have done. Also why 2 + 2 = 5 (not a 1984 reference.) because together everyone achieves more.

However, throughout the FIRO group process, informal and formal roles are assigned to the group members. Most of the time one of the members gets the leader role. It is important to understand the difference between a leader and a boss. A boss is a formal title someone gets from a job. A leader has a relationship between people, where the follower gives the leader power. A boss does not automatically become a leader, and a leader does not have to be a boss. The best combination is of course when the boss is a great leader.

It is important to realize that everyone is a leader. And through small actions every day, you prove to yourself and others that you are a capable person to lead in a correct and moral way. One example could be, for say, picking up trash after other people. But everyone does not lead in the same way, Blake and Mouton explain through their Management Grid, that there are two types of leaders: those who are staff-oriented and those who are result-oriented. Some staff-oriented leadership styles are for example charismatic- and democratic leadership. While leadership styles such as transactional and authoritarian leadership are more result-oriented.

In conclusion, one has to find his or her own leadership style. Through everyday leadership, one will become capable of leading a successful project next time a new group comes about. Through a common goal and purpose, the group will produce great results, and do not forget: “People don’t buy what you buy, they buy why you do it.”